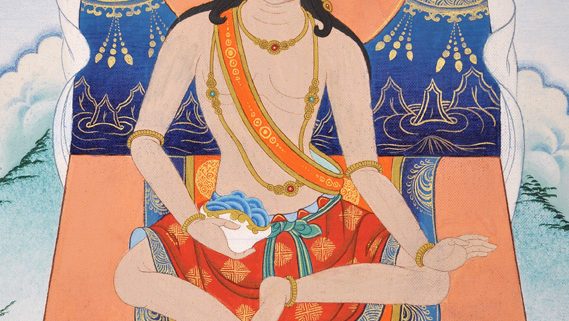 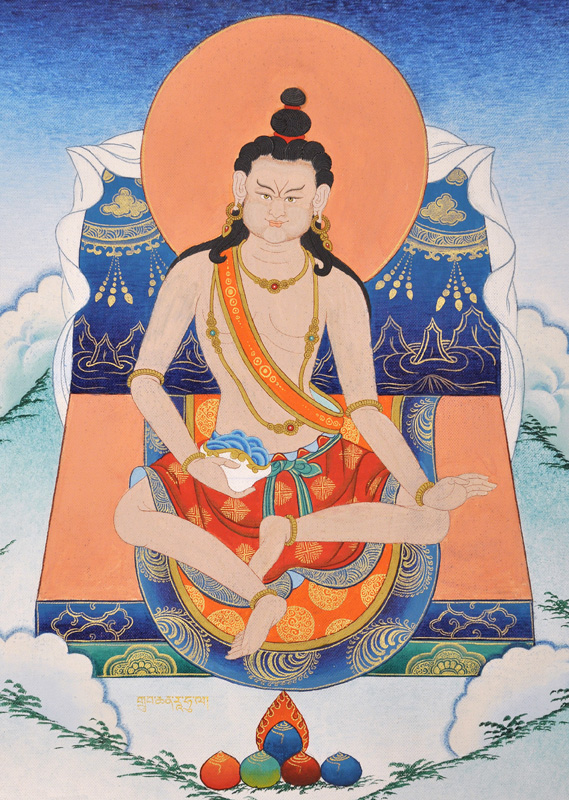 Rahula (also known as “the Yogin of the Black Mountain”) is a quite known Indian Mahasiddha who was a teacher to both the great Atisha and Khedrub Khyungpo Naljor, the founder of the Shangpa tradition.

Rahula was born into a royal family in the town of Bhiraji or Bhirajo, in a region named Elabhisha or Elabhesha. At birth, Avalokiteshvara, Tara, Vajrayogini and the Swift-Acting Awareness-Protector (Six-armed Mahakala) revealed their faces and blessed him. During his youth he became severely ill and developed sincere disillusionment and disgust with the ways of samsara. He thus entered upon the path of Buddhadharma and became very learned, especially in the tantras and treatises.

His main teachers then were the masters Gunasagara and Ratnasagara, who provided him with precepts which allowed him to attain accomplishment easily. He thus attained the state of an awareness holder with control over the length of his life and eventually realized Mahamudra.
Rahula is said to dwell in a vajra body on the wooded hill known as Black Mountain.

Meeting with Khyungpo Naljor
Rahula miraculously flew to Tibet one day, and spent seven or, according to other sources, eleven months with Khyungpo Naljor, transmitting to him many teachings, especially on the Six-armed Mahakala and the Combined Accomplishment of the Four Deities, which is one of the most important core practices of the Shangpa Kagyü lineage. He is thus the only Indian teacher of Khyungpo Naljor whom he did not meet in India itself but who actually sought him out in Tibet.

Meeting with Atisha
Concerning the meeting of Atisha and Rahula, Atisha’s master, Avadhutipa, sent the young prince to the master Rahulagupta, on the Black Mountain, to enter the practice of tantra. Atisha arrived with all his horsemen and told this vajra master how he had studied with many teachers, but still was unable to shake off his bondage to royal life. Rahulagupta conferred upon him his first empowerment, which was into the practice of Hevajra. He then sent him back to the palace with eight of his disciples, four male and four female, dressed scantily in the bone ornaments of mahasiddhas, great adepts with actual attainments.
After having practiced for some time, Atisha’s vajra master Rahulagupta told him, “It does not matter how many pure visions you receive, you must train to develop caring love, compassionate sympathy, and a bodhicitta aim totally dedicated to benefiting others and to achieving enlightenment.” He advised him to commit himself wholeheartedly to Avalokiteshvara, to bond his mind closely with him and work to become enlightened so that he could best free everyone from samsara. Only with this achievement would he realize his fullest potential.