You are here: Home / Tradition / The Retreat Centers

The three-year retreat in the form we know today goes back to Jamgön Kongtrül Lodrö Thayé. It is based on the yogic tradition of retreat of the Nyingma and Kagyü lineages.
There were four retreat centers at Palpung monastery (Dergé, Kham, Eastern Tibet), seat of the Situpa : 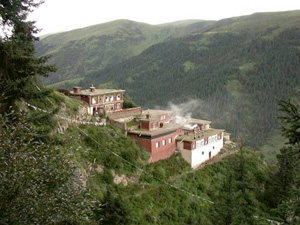 Nigu Drubkhang was located at Tsadra Rinchen Drak, ’the Jewel Cliff which resembles Tsari’ — the sacred site above Palpung Monastery. The site also became Jamgön Kongtrül Lodrö Thayé’s main residence, where he wrote most of The Five Great Treasures, as well as becoming the new seat of the Shangpa Kagyü tradition. It is considered to be one of the twenty-five holy places of east Tibet (mdo khams), representing the mind aspect of enlightened qualities. Chokgyur Dechen Lingpa revealed the sacred site in 1859 and both he and Tertön Sogyal later revealed termas from its hillsides.

In the short life story of Jamgön Kongtrül in Timeless Rapture, Ngawang Zangpo writes:
“In a land where monastic communities could number in the thousands – how large was the retreat center that Kongtrül built, how many Shangpa lamas would he train in each (three-year) retreat? The answer: four. Not four thousand, four hundred, forty, or fourteen. Four. In all, eight persons lived in this small community: a vajra master, five retreatants (one of whom acted only as guardian of the temple), a cook, and a woodsman. This, then, was Kongtrül vision for the continuation of the Shangpa lineage: four lamas every three and a half years, at most.”

Later, thanks to the great activity of Kyabjé Kalu Rinpoché, many three-retreat centers were founded in India and around the world, revitalizing the tradition and ensuring its continuity.

From the time of Jamgön Kongtrül, the Shangpa lineage has been mainly taught and practiced in the three-year retreat centers.