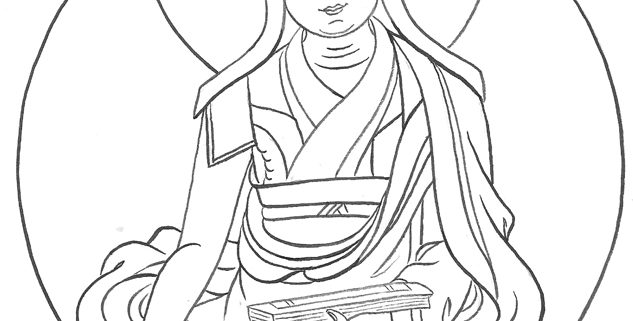 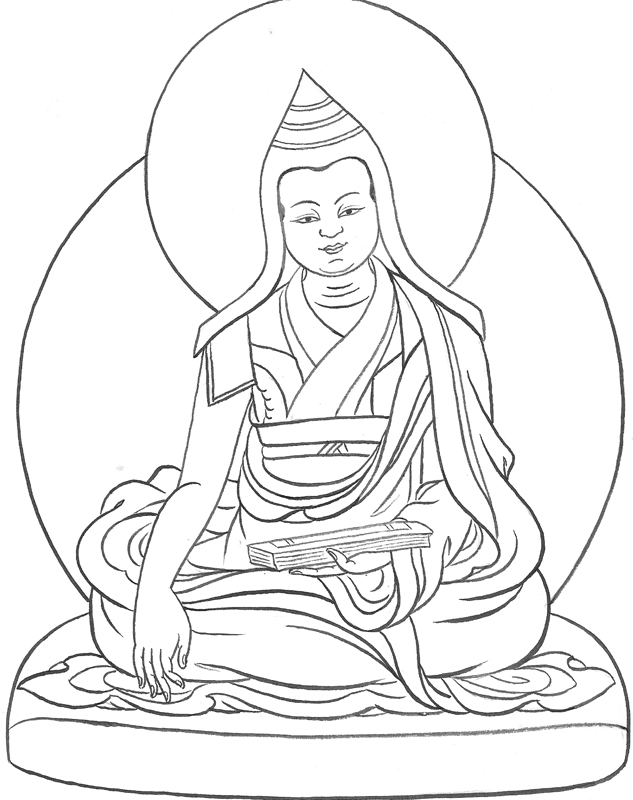 Khedrub Tsangma Shangtön was born into the Ra family at Kongya in Shang, and could read and write fluently by the time he was eight years old. He felt no desire or greed and felt great revulsion for samsara while developing compassion and faith in the lamas and the three jewels.

Shangtönpa was free of any laziness and was ordained as a novice monk before the abbot Nyitokpa and the teacher Tsülshé at the age of thirteen. He studied engaging in the Bodhisattva’s Path and the Prajnaparamita with his teachers Ba and Shakya Shangtönpa Bumpa and presented new commentaries on both of these texts. His teachers congratulated him and advised him to teach them. He was renowned all over Central and Western Tibet as Tönpa Sangwa (excellent teacher). Because of his extraordinary intelligence he naturally understood complete texts by just reading the first line of the topic of a text. He received many teachings from the second Karmapa, Karmapakshi, including the Three Bodies Pointing-Out Instructions of the Karma Kagyu tradition. Shangtönpa received the Lamdré teachings of the Sakya tradition from Lama Genmo Lhepa. He developed supernatural faculties, gave birth to definitive understanding and sustained pure samadhi. Shangtönpa completed one hundred million mantras of his yidam deity, and through the power of his practice he had the ability to purify all disease and evil spirits.

Still Khedrub Tsangma Shangtön thought that those abilities did not really benefit beings, so he approached the realized Lama Sangyé Tönpa and received additional empowerments and teachings. Sangye Tönpa proceeded to grant him the general empowerments of Dream Yoga, Illusory Body, the complete instructions for the Six Yogas of Niguma, including teachings on the “path of means” which is what the practice of inner heat (gtum mo) is called in the Shangpa tradition. Khedrub Tsangma Shangtön was able to master the practice inner heat within seven days and mastered all of the other practices within a short span of time. His practice was even greater than that of his teacher Sangye Tönpa in achieving the essential meaning of the instructions. Shangtönpa was the finest heart son-disciple of Sangye Tönpa in the one-to-one guru-to-disciple transmission. Many spiritual friends came to his retreat for teaching and he granted them the Six Yogas of Niguma, Mahamudra Reliquary, Mind Deathlessness and so on.

Khedrub Tsangma Shangtön passed on at the age of seventy-six. After his cremation, his relics were divided among his students. One of them took a piece of his skull to Nepal. It was greatly admired there by many masters for its great blessings and is, until the present day, enshrined in the Svayambunath stupa in the Kathmandu valley.

Tsangma Shangtön is the first of the Later Seven Jewels of the Shangpa Kagyü.